Here you can find some selected tools for creating, editing and converting your fonts. 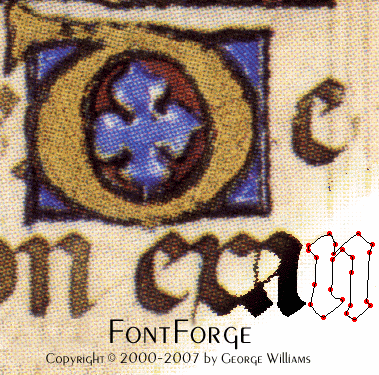 FontForge is an open source software by George Williams and part of the Sourceforge project.
The homepage offers the download of the source code, as well as ready-to-use software versions for Mac, Windows and Linux. It is mighty and can handle a load of different font files such as tuetype, opentype, postscript and bitmapt. A detailed manual can be found on the FontForge website.

FontLab Studio 5.1 ist THE professional commercial font editing suite. It is offered for both Mac and PC at the high price of US$ 649. The FontLab homepage is well worth a visit, they also have other (more affordable) font software, such as the Fontographer (formerly from Macromedia), also versioned 5.1 and available for 'only' US$ 399.

DTL FontTools are available in a free light version and also as a full high-quality font creation suite. Both versions have a so-called Ikarus tool that helps you creating high-quality fonts.

Manutius 2.0 is an out-of-date (1997, but still working on Windows XP machines) tool for creating Type-1 fonts. The author Dr. Andreas Gebert re-released it for free use a while ago. It is relatively (!) simple to use
and can be controlled with a variety of shortcuts (and the mouse, of course).

High-Logics Font Creator has two major advantages when compared to FontLab: it is way cheaper (a license is around US$ 79) and it is easier to use. Of course, it has less editing functions. A nice feature of FontCreator is that it can trace scanned Bitmaps to TrueType fonts. If you're not aiming at the creation of really professional fonts and just want to try fontmaking or edit something for private use, you should at least download the free trial version from
High-Logic. They also offer another interesting Tool named Scanahand that enables you to make a font out of a scanned sheet with hand-drawn letters.

dp4 fontviewer is a free font viewing tool for Windows that can list fonts from any given folder. There is a variety of preview functions, printing and it comes with its own font rendering engine. The tool is very handy and does not need to be installed.

Advanced Fontviewer is a more luxurious font viewer and manager for around US$30, created by Alexander Styopkin. The font preview text can be freely selected, fonts can easily be compared and printed and the font details and information can be displayed.
Additionally, fonts that have not yet been installed can be viewed and installed directly from any folder.

TT Converter is a simple, small (and really aged) tool for Mac, enabling you to convert Windows fonts into the Mac OS 9 file format. OS X users can simply use .ttf and .otf fonts without using a converter.

CrossFont primarily is a tool for converting fonts. It supports Type1, Opentype and Truetype fonts and converts between these formats. It also supports the data fork (.dfont) format which is native to Mac OS.
It is able to perform batch conversions and has some additional features like editing font menu names. It can also help you to find fonts on your harddisk, even when they are hidden in .zip Archives. A full version sells for around US$ 59, while a free trial version can be used for 15 days.